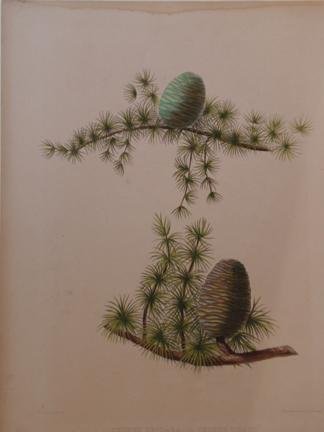 A very detailed hand colored lithograph by Edward James Ravenscroft (1816-1890)from his monumental book "The Pinetum Britannicum: A Descriptive Account of Hardy Coniferous Trees Cultivated in Great Britain." which was printed in Edinburgh and London in 1863-1884. Overall this print measures 22" x 15.25". The development of botanical illustration in many ways echoes that of other art forms in that it is influenced by politics, philosophy and, of course, science. Perhaps at no time was this more pressingly visible than during nineteenth-century Britain where the aspirations of an expanding Empire resulted in a national pride that fostered scientific discovery as well as art. At the heart of this movement were the newly crowned Queen Victoria and her husband Prince Albert. As Consort rather than King, Albert's role was somewhat ambivalent and although he acted as a valuable advisor to his wife, it was the Queen alone who bore responsibility the operations of government. He, thus, was obliged to find his own interests and became a valued patron of the arts and sciences. His involvement in the coordination of the Great Exhibition of 1851 in large part helped to ensure its success. Therefore, it is with little surprise that Edward James Ravenscroft dedicated his large three folio work on pine trees, Pinetum Brittanicum, to the memory of the much adored Prince Consort, Albert. In December 1861 the Queen's husband died leaving her emotionally devastated and plunging the Empire into mourning. Ravenscroft could not have thought of a more appropriate dedication, as it was the German-born Albert who had introduced the Christmas tree tradition to Britain. Ravenscroft's publication is widely considered to be one of the greatest works on pines and is lavishly illustrated with colorful and refined depictions of many varieties of pine trees from both sides of the Atlantic. For example, The "Wellingtonia" - of "Washingtonia," as Americans proposed to call it - now Sequoiadendron giga
Tweet