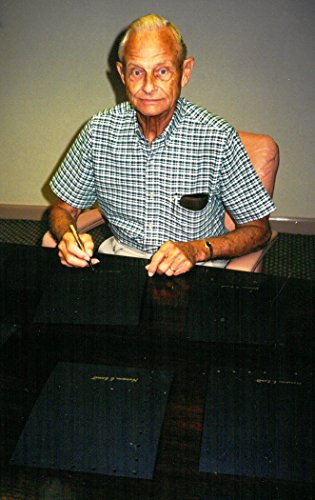 WWII pilot Herman Ernst was a five victory ace flying the Northrop P-61 Black Widow with the 422nd Night Fighter Squadron in the European Theater of Operations. This is number 2 from an edition of only 25 pieces of scrap aircraft aluminum autographed by Ernst and featuring an authentic replication of his squadron insignia hand-painted by artist Ron Kaplan. Mounted in a beautiful 15.5" by 16.5" Swedish walnut shadowbox, it features an engraved brass identification plaque and arrives ready to hang. It also includes a 4x6" photo taken of Ernst as he signed this edition with a gold paint pen in 1998. With the purpose-built night-fighting Black Widow appearing late in the war, Ernst was one of only four to achieve ace status (five aerial victories) in the P-61. He passed away in 2003 at age 85. The infamous 422nd "green bat" insignia is still proudly in use today by the 422nd Test & Evaluation Squadron based at Nellis Air Force Base, Nevada. Ron Kaplan, the artist, is noted for this and many other similarly hand-painted editions of scrap aircraft aluminum that each are autographed by some the greatest aces and military pilots of WWII, Korea and Vietnam. Kaplan is a member of the USAF Art Program, former director of the National Aviation Hall of Fame, columnist and photographer, and founding director of the Ohio Air & Space Hall of Fame. *Packaging, handling & insurance not included 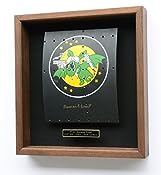