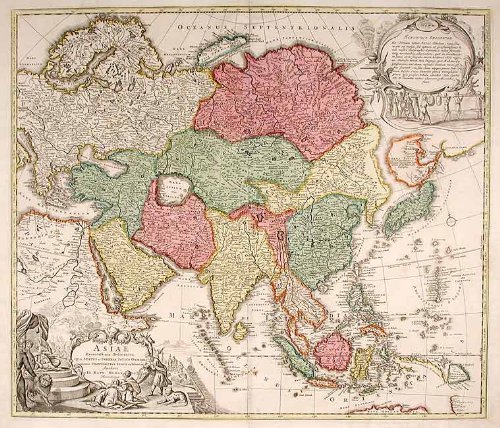 Nuremberg: J. B. Homann, (c. 1730). Engraving with hand-colouring. Excellent condition apart from two small spots in the Indian Ocean. Plate mark: 19 1/2 x 22 5/8 inches. Sheet size: 21 x 23 3/4 inches. An early map of Asia that includes the northern tip of Australia and Papua, New Guinea, by the celebrated German cartographer, J. B. Homann. Johann Baptiste Homann established in the early years of the 18th century the most successful map publishing firm in Germany. His prolific business, which his family continued after his death, dominated Germany's map market for over a century and produced some of the finest maps and atlases of the age. He started the firm in Nuremberg, and, in 1715, he was appointed Geographer to the Emperor.This is a lovely example of Homann's first map of Asia. It includes the northern tip of Australia (Nova Hollandia) Carpentaria, Nova Britannia and the Marianas. Hokkaido is identified as Terra Yedso and the fictional Compagnie Land, to the northeast of Japan. Dampier's passage is shown stretching between New Guinea and New Britain and marks his discovery of New Britain in 1700. The map is a wonderful example of Homann's ornate, Baroque style.The title cartouche shows an Asian potentate pointing his scepter at three subjects, who bow on their hands and knees before him. The other cartouche in the upper right corner with a note to the viewer shows a procession of soldiers carrying a Hindu idol followed by men playing gongs, drums and wind instruments. Tooley, Maps and Map-makers 27, 107-108
Tweet