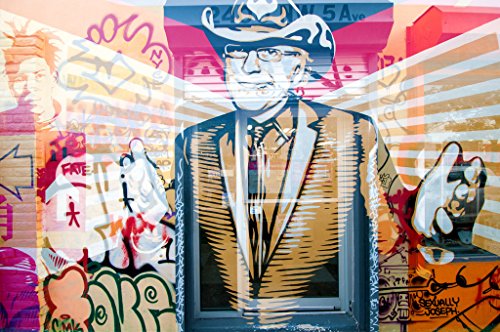 David Bethune's multiple exposure photography is now available in limited edition prints on 1" thick gallery-wrapped canvas. Each piece is signed by the artist and numbered. Ungallery artwork is produced on demand using the highest quality art materials and methods. Art is a remix, from tagging to museum "originals," everything draws from a shared art history. Street art takes an aggressive stance on copyright, in all directions. Some artists could care less if their works are copied or used to make money. Others cry infringement at the first appearance of their work in print. And street artists are often getting sued over their art, or suing others. A case that fits both points is Shepard Fairey, a justifiably famous painter who enjoys both street cred and commercial success. Shepard sued a tequila brand over the use of his images before later being carted off to jail for painting on a building without permission. This particular piece sits in a gated-off and guarded part of the Wynwood street art district known as the Wynwood Walls. A wealthy local developer has decided that the best way to present street art around his buildings is to close them off with gates. I don't think that's exactly the spirit of all of this, but he does have some nice things inside those gates. Jean-Michel Basquiat makes an appearance here. He's faded out by the second exposure, made at 2400 NW 5th Avenue, where a tag from Sexually Joseph stands out from the wall like a signature. I was born in Austin but grew up in California and this guy reminds me both of Big Tex from the Texas State Fair and also Cal Worthington from the kitschy car ads on TV. I love that his heart and chest are opened to the doorway behind him. In this neighborhood, even the police don't know which businesses are in business and which are abandoned, so its anyone's guess what's behind the door.
Tweet