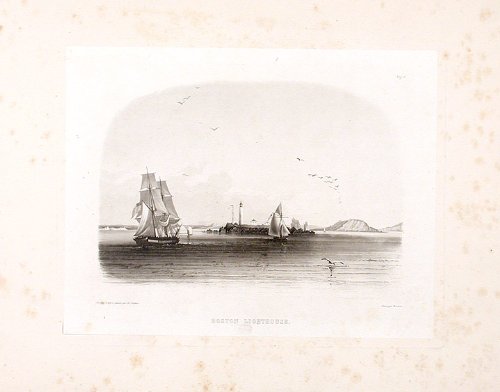 (Vig. 1). (Paris, Coblenz and London: 1839-42). Aquatint engraving by Martens after Bodmer, proof on india paper mounted, issue with no imprint and no titles in French or German, blindstamp. Tear to lower blank margin not affecting plate area, mount spotted. Plate mark: 8 1/2 x 11 inches. Sheet size: 12 1/2 x 17 5/8 inches. A rare India proof of this evocative scene recalling Bodmer's arrival at his gateway to the New World: the American brig Janus, with Bodmer and Prince Maximilian aboard, is here seen at the end of the relatively perilous Atlantic crossing, passing the lighthouse and making its way into Boston harbour. It is the morning of 4th July 1832 and the explorers are greeted by the cry of wheeling sea-birds, perhaps roused by the sound of the cannons being fired in the distance, in celebration of the United States fifty-sixth anniversary of Independence.Karl Bodmer's images show great versatility and technical virtuosity and give us a uniquely accomplished and detailed picture of a previously little understood (and soon to vanish) way of life. Swiss-born Bodmer was engaged by Prince Maximilian zu Wied-Neuwied (1782-1867) specifically to provide a record of his travels in North America, principally among the Plains Indians. In the company of David Dreidoppel (Prince Maximilian's servant and hunting companion), their travels in North America were to last from 1832 to 1834. They arrived in Boston in July 1832, traveled on to Philadelphia, where they stayed with Napoleon Bonaparte's elder brother Joseph. From here they headed west across Pennsylvania across the Alleghenies to Pittsburgh and the Ohio country, visiting all the important German settlements en route. Their most important stop on their route west was at the utopian colony of New Harmony in Indiana. The Prince spent five months there in the company of some of the countries leading scientific men, and studying all the relevant literature on backcountry America.
Tweet