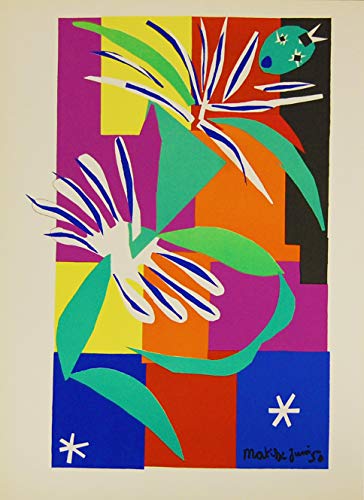 "Danseuse Creole" by internationally recognized artist, Henri Matisse, is an original lithographic print from the Verve Vol VI edition. Created in 1950, this abstract piece was published by Editions de la Revue Verve in Paris. This piece is one of the greatest examples of Henri Matisse's cut-out works. The cut-out is technically related to the collage. Matisse executed this work by snipping forms from paper coloured in one hue. The total work contains cut-out forms in contrasting colours on a white surface. He began this method in 1940, but in his last years this medium dominated all his work. The space surrounding the objects is just as important as the objects themselves. Matisse created this monumental cut-out while recuperating from a major operation which prevented him working in his studio. This piece exhibits the avant-garde vision of Matisse that continues to influence the course of art and design to the present day. It demonstrates his modernist style unlike anything the world had seen before.
Professionally framed lithograph ships ready to hang 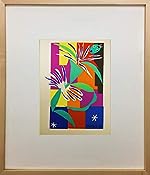