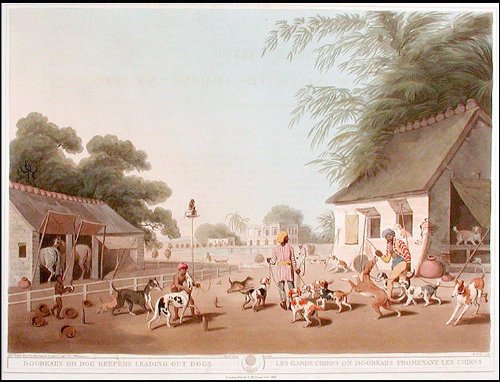 (Pl. 37). London: Edward Orme, 1807-1808. Aquatint engraving, coloured by hand, by H. Merke, after Howitt from an original sketch by Williamson. Very good condition. Plate mark: approximately 14 7/8 x 19 1/4 inches. Sheet size: approximately 18 1/4 x 21 5/8 inches. For the British colonists living in India during the nineteenth-century, modest bungalows situated on plantations became the equivalent of a country estate in England. As pictured in this fine image from Williamson's 'Oriental Field Sports', these 'estates' frequently included kennels that housed hunting dogs and stables, both of which were usually maintained by local servants.One of the finest and most detailed works on Indian Sport and wildlife, these images exemplify not only the native flora and fauna, but capture the excitement of the hunt and provide "a faithful representation of (the) picturesque country, together with the manners and customs of both the native and European inhabitants". (Prideaux)Captain Thomas Williamson, a British officer of the East India Company, served in Bengal for 20 years. An accomplished amateur artist, his sketches were then worked up into drawings by Samuel Howitt and engraved for publication.Samuel Howitt, artist and sportsman, was largely self-taught in his profession, though he belonged to the artistic circles of the day. He is considered by some critics to be second only to Stubbs in the ranks of British animal painters. He is well-known for his sporting scenes of racing and hunting and for scenes depicting both conventional and exotic animals like the rhinoceros, tiger, leopard, bear, deer and buffalo.Cf. Abbey Travel 427; cf. Mellon 88; cf. Nissen BBI 4416; cf. Prideaux, p. 282; cf. Schwerdt II, pp.297-298; cf. Tooley 508.
Tweet