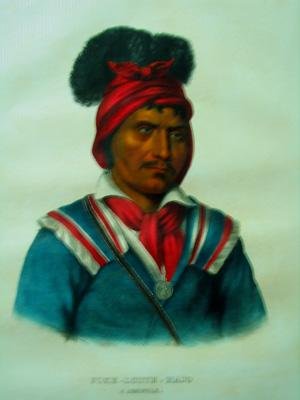 A wonderfully detailed hand colored lithograph with beautiful original color from Thomas L. McKenney and James Hall's historically significant book "History of the Indian Tribes of North America", which was published in Philadelphia in 1836. This print is from the larger folio version and measures 20"x14". From 1816 until 1830, Thomas McKenney was Superintendent of Indian Affairs and one of a very few government officials to defend American Indian interests. When a large delegation of Indians came to see President Monroe in 1821, McKenney commissioned the fashionable portraitist Charles Bird King to paint the principal delegates, dressed in costumes of their choice. Many of the most prominent Indian leaders of the nineteenth century were among King's sitters, including Sequoyah, Red Jacket, Major Ridge, Cornplanter, and Osceola. The portraits hung in the War Department until l858, when they were moved to the Smithsonian Institute. Most of King's original portraits were subsequently destroyed in a fire at the Smithsonian in 1865, so their appearance in McKenney and Hall's publication is the only record of the likenesses of many of the most prominent Indian leaders of the nineteenth century: Sequoyah, Red Jacket, Major Ridge, Cornplanter, and Osceola were numbered among King's sitters. Andrew Jackson dismissed McKenney in 1830, but allowed him to have the portraits copied by Henry Inman, so that lithographs could be made from McKenney's "Indian Gallery." Additional images were taken from paintings by James Otto Lewis, George Catlin and other artists. James C. Hall, a Cincinnati judge and novelist, contributed an historical and anecdotal text. Both authors, not unlike George Catlin, whom they tried to enlist in their own publishing enterprise, saw their work as a means of preserving an accurate visual record of a rapidly disappearing culture. The portfolio nearly bankrupted McKenney as well as the two printing firms who invested in its publication. But their work prove
Tweet