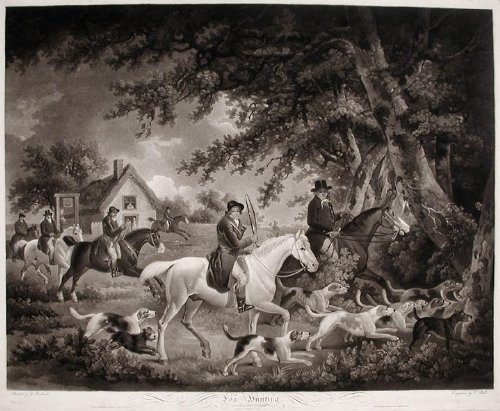 London: Published by E. Bell, No. 45 Islington Road near Sadlers Wells, August 1, 1801. Mezzotint. Printed on laid paper. In good condition. Trimmed just outside the platemark on all sides. Faint printer's crease in upper right corner of plate. Image size: 20 x 25 1/2. Plate mark: 21 5/8 x 26 3/4 inches. Sheet size: 22 1/2 x 27 1/8 inches. This lovely image is the second plate in a set of four hunting mezzotints engraved by Edward Bell after paintings by George Morland.George Morland was one of the most successful genre painters of his time, creating, during his industrious career, some of England's most cherished paintings. At an early age Morland displayed his artistic genius, he learned to paint at three and exhibited his first work at the Royal Academy at the mere age of ten. Morland was a prodigious painter, producing more than 4000 paintings during the entirety of his career, and sometimes painting two or three works in a day. His beautiful idealistic scenes were a favorite source of inspiration for contemporary engravers, and as many as 250 separate engravings were done of his paintings during his lifetime. Morland is considered a master of genre, his beautiful paintings depict with insightful subtlety the tender side of English country life.This beautiful print is the second plate in a set of four mezzotints engraved by Edward Bell in the spring of 1800. Primarily a genre painter, Morland only produced a few sporting paintings during his career and this beautiful set is considered some of his best work. The image depicts a group of hunters and their dogs in pursuit of the fox.Siltzer, The Story of British Sporting Prints p. 190
Tweet