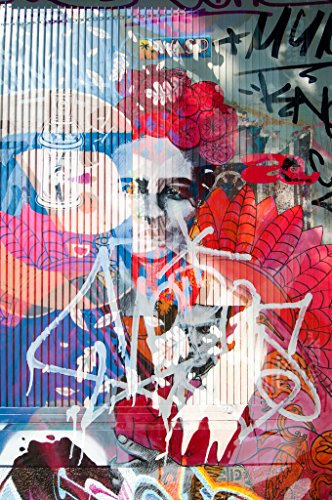 David Bethune's multiple exposure photography is now available in limited edition prints on 1" thick gallery-wrapped canvas. Each piece is signed by the artist and numbered. Ungallery artwork is produced on demand using the highest quality art materials and methods. I took this picture before I realized what a great artist Frida Kahlo really was. She was certainly popular in Mexican culture which spread over into California where I grew up, but I hadn't had a chance to see her greatest works in person until a show co-sponsored by the Mexican government brought them to NSU Fort Lauderdale Art Museum in April 2015. The images of Frida here actually came from a utility box which was somewhat hidden beneath a tree in the Wynwood street art district. It was a striking effect to see the bright colors of the poster collage against the otherwise dull grey of the electrical box, and this is the contrast I tried to capture here by creating a multiple exposure with another side of the same box. You can see the running metal texture through the photo. At the bottom, a tattooed arm reaches into the street below to hold up the bottom of the box as it embraces another, smaller portrait of Frida nestled inside the arms of the first. I love the power and assertive color that she embodies here and I think it speaks well to her dynamic, turbulent life. You can also spot in this image a fire hydrant that's turned into a global spray can, representing street art and street life, along with a palm-tree'd sticker which was overlaid onto the box. It reads, "WASP."
Tweet