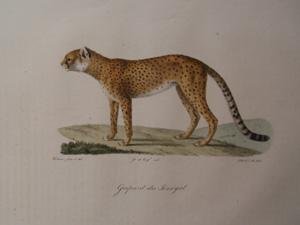 A detailed hand colored lithograph by Frederic Cuvier (1769-1832) & Geoffroy Saint-Hilaire (1772-1844) from their sweeping book "Histoire Naturelle des Mammiferes, avec les figures originales." that was published in Paris in 1824-42. Overall this print measures 12" x 18". This rare publication of mammals was originally published in 72 parts (to be bound in seven volumes) under the auspices of the Museum d'Histoire Naturelle of Paris. The animals were drawn from life mainly at the zoo Jardin des Plantes in Paris. The majority of the descriptions were by Cuvier, with Geoffroy Saint-Hilaire editing the work and providing occasional articles (indicating by his initials at the end of each article). The two final parts were edited and seen through the press by Cuvier's son. A quarto edit was started in 1826, but ceased publication (with the 13th part) in July 1833. These are among some of the most exquisitely rendered images of animals ever published. Cuvier has successfully brought each animal to life by his exceptional talent for detail without forgetting the characteristics that give them personality.
Tweet