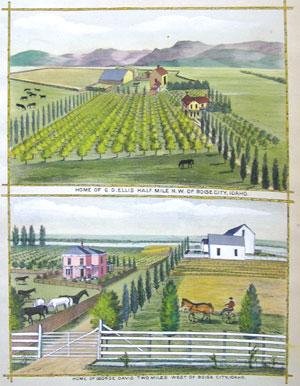 Thompson and West History of Idaho Territory, Showing Its Resources and Advantages: with Illustrations Descriptive of Its Scenery, Residences, Farms, Mines, Mills, Hotels, Business Houses, Schools, Churches &c. From Original Drawings Publisher: Wallace W. Elliott, San Francisco, 1884 Hand-colored lithograph (later color) 10 1/2" x 13 3/4" Thomas H. Thompson, formerly Captain Thomas, began his career preparing maps and atlases of Illinois and Iowa counties. At various times of his life he was in partnership with several different men, two of them, Louis Everts and Alfred Andreas, were old acquaintances from his army days. In 1870 Thompson and Everts began publishing atlases, releasing in that year what they called "combination atlas maps." In the 1870 atlases, lithographic illustrations were placed at the rear of the volumes. After 1870 the illustrations were interleaved with township maps throughout the atlases. The atlases were sold by subscription by traveling salesmen. Thompson and Everts dissolved their partnership in the early 70s and in 1875 Thompson migrated to California. There he published atlases of Sonoma County (1877), Fresno County (1891), and Tulare County (1892). In partnership with West, he issued atlases of Santa Clara County (1875), Alameda County (1878) and Solano County (1878). All are illustrated with lithographic views and sketches similar to those in the atlases of mid-western counties. In 1884 Thompson and West published The History of the Idaho Territory. This atlas was first full-scale history of Idaho, with a splendid array of lithographed plates showing the farms, mines, houses, and other features of Idaho settlements, including bird's-eye views of several of the towns. Much space is devoted to the mining industries and other economic enterprises, but there is also treatment of early exploration, Indian Wars and other aspects of Idaho history and settlement.
Tweet