I have a Notion however hard work it is _ that this is the only way to get my Lame Horse Home. 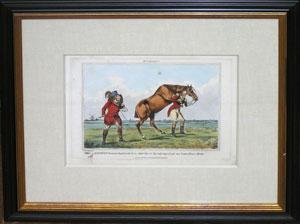 Henry Alken (1785-1851) Notions series London: 1832 Hand-colored aquatint engraving 16 ½" x 19 ½" framed Henry Thomas Alken was born into a family of successful artists. His father, Samuel Alken, was one of the most prolific and acclaimed British sporting artists of his days. Samuel was responsible for the early art instruction that set his son, Henry, on a path towards even greater recognition than his own. Henry received his training not just from his father, but also from the miniature painter J. T. Beaumont (1774-1851), an experience that endowed him with an accomplished graphic precision. He applied this skill to his flippant and anecdotal early paintings, etchings and watercolors of hunting, coaching, racing and other animal subjects. He was also employed by sporting periodicals as an illustrator, and provided plates for the National Sports of Great Britain (London, 1821), strengthening the market for his work in sporting circles, in particular the notorious clique of wealthy and reckless huntsmen who gathered at Melton Mowbray, Leics. In this series on engravings, entitled Notions, Henry Alken presents the comic side of riding. The scenes depict the follies of aristocrats on their weekend sporting outings. At the time these engravings were published, caricature prints mocking the British aristocracy were very popular.
Tweet