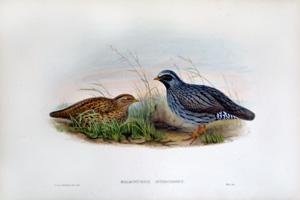 This splendid hand-colored, folio-size lithograph, Malacoturnix Superciliosus, from John Gould's (1804-1881) monumental book "Birds of Asia" (1850-1883) is in mint condition. Measuring 15" x 21.75", this lithograph displays the author's scientific skill and attention to detail. Commonly called Slate Coloured Partridge, these members of the pheasant family are expertly hand-colored. The male is colored steel blue-gray with a black throat and eye mask and spotted plumage. The female is colored in shades of brown with black and brown patterned plumage. John Gould was an English ornithologist, self-taught artist and naturalist. Gould first worked as a gardener under his father in the Royal Gardens of Windsor from 1818-1824, where he began his illustrations. He became an expert taxidermist, opening his own practice in London in 1824 and in 1827 he became the first Curator and Preserver at the museum of the Zoological Society of London. Through his work he was able to meet with the country's leading naturalists and view new collections of birds given to the Zoological Society. His interest in birds was continually developing and in 1830 he published his first volume on birds, "A Century of Birds From the Himalaya Mountains." For the next fifty years, Gould, his wife and artists working with them traveled around Asia, the East Indies and Australia. His wife Elizabeth and other artists were able to transfer his sketches to stone; hand print and hand-color them. One of Gould's greatest achievements, the "Birds of Asia" was in production longer than any of his other work, taking thirty-four years for the appearance of its thirty-five parts. The ornithologist was fascinated by the diversity of the exotic, colorful species of Asia, and he conveyed his enchantment to viewers, creating one of his most monumental and magnificent sets. For the preparation of "Birds of Asia", Gould's team of artists was joined by the German-born Josef Wolf, who, like Richter and Hart, would also bec
Tweet