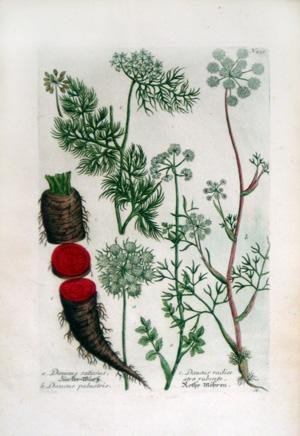 Johann Wilhelm Weinmann (1683-1741) was an influential pharmacist and botanist, and director of the longest established pharmacy in Regensburg, Germany. Weinmann supervised the compilation of the important and valuable 18th century florigium, "The Phytanthoza Iconographia", which contains 1,025 plates of botanicals, aloe, cacti, trees, fruits and vegetables, depicting 4,000 species. Weinmann's background as an apothecary is evident in the composition and style of the prints, which are both scientific and beautifully decorative as well. The "Phytanthoza Iconographia" is remarkable not only for the beauty and accuracy of its illustrations, but also for the successful use of color printing. Most of the plates were engraved with what was considered a recently developed process which combined etching and mezzotint. Having solid areas in colored mezzotint allowed for the subtle variations of tone in the flower petals and leaves, with watercolor details added. Many of these plates are engraved after the drawings of the distinguished German botanical artist Georg Dionysius Ehret (1708-1770), who was employed by Weinmann as a young man. These were Ehrets first published works before he went on to compile his own botanical volumes. The botanical descriptions for the first twenty-five plates was written by Johann Georg Nicolaus Dieterichs (1681-1737), who was succeeded by his son Ludwig Michael (1716-1747), and the work was completed after Weinmann's death by Ambrosius Karl Bieler (1693-1747). This mezzotint and line engraving, N. 459, Daucus, measures 15.75" x 9.5" and is in excellent condition with evidence of previous binding on the left edge. Commonly called wild carrots or Queen Anne's Lace, this expertly hand-colored engraving illustrates the differing flowers of the carrots as well as a cross-section of a carrot, with its fibrous roots attached. The delicate white flowers and leaves are expertly detailed and labeled in this splendid engraving.
Tweet