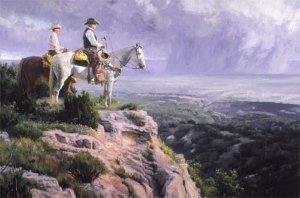 The concept for "On God's Footstool" began several years ago when the Bruce Greene was visiting the JA Ranch. The foreman took him to the top of Mitchel Peak which is the highest point in the Palo Duro Canyon. As the sun was setting, they watched a summer shower come across the huge expanse. It was a special time of the revelation of God and His creation. Greene chose to paint himself, along with a close friend, on the crest of the peak, on horseback, and taking it all in.
Tweet