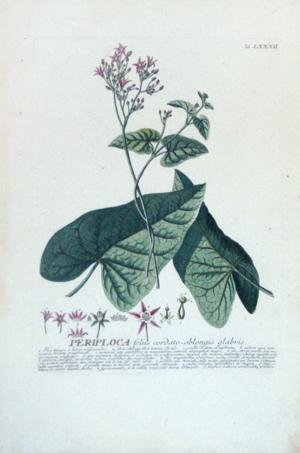 George Dionysius Ehret (1708-1770) is considered the most important and influential botanical artist of the mid-18th century. Born to farmers in Heidelberg, Germany in 1708, Ehret showed an early propensity for drawing, though as a young man he was employed primarily as a gardener. He used his time spent gardening to examine and practice drawing botanicals and the natural world around him. Having attracted the attention of noted botanical artist Johann Weinmann and noted Nuremberg physician Dr. Christoph Jakob Trew, he gained encouragement and financial support for his works. In 1736, Ehret met eminent botanist Carl Linnaeus, who created the first classification system of plants, and moved to England where he remained for the duration of his life. As a result of the arrival of new plant species to England and around Europe, Ehret was in position to draw and document them, further developing his skills. As instructor to the highest of English nobility, he engaged in his publication of Plantae Selectae with financial patronage and text from Dr. Trew. Plantae Selectae was published in Nuremberg in 1750-1773. Various scholars of the time praised the folio highly, singling out the excellent quality of Ehret's botanical studies. These highly detailed engravings are brilliantly hand colored and still retain their vibrancy. This engraving, 20" x 14" is in excellent condition with slight color staining on the flowers. Periploca is an ornamental perennial plant, commonly known as Silk Vine or Wolfbane. This beautifully hand colored engraving shows the leaves of the plant in the foreground, greatly over-sized with exquisite detailing of the veins and color. The delicate flowers are shown blooming from the stems and sections of the flower parts and detailed below as well. This engraving is highly comprehensive and wonderfully detailed.
Tweet