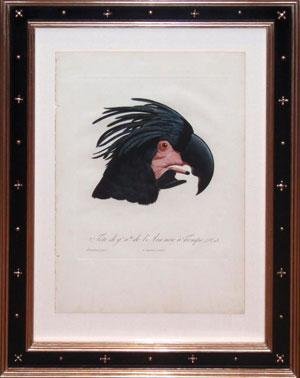 Jacques Barraband (1767-1809) From Histoire Naturelle des Perroquets Paris: 1801-5 Hand-colored copperplate engraving in very good condition 26 1/2" x 19 1/2" framed, framed in museum quality frame with uv plexiglass /archival materials Jacques Barraband's (1767-1809) engravings of birds are masterpieces of French ornithological illustration. These stunning portraits were done for the distinguished ornithologist Francois Levaillant, who commissioned the artist to illustrate his landmark works on African ornithology, including the lavish and striking Histoire Naturelle des Perroquets. Images of African birds were popular in early 19th-century France both for their exoticism and for the interest in Africa that Napoleon's campaigns were generating. The collaboration of Levaillant and Barraband represented a departure from previous ornithological texts in its emphasis on beauty and luxury, with sumptuously colored and flawlessly rendered birds. The project was a massive undertaking, which required over 300 finished watercolors. Apart from their undoubted beauty, Barraband's engravings display a scientific accuracy that few ornithological artists have matched since. The meticulous hand-colored engravings in Levaillant's publications were unmatched for the delicate modulations of tone and color, fine lines and perfect draftsmanship, making them exceptional in their richness and tonal variation. Each feather is described by dozens of parallel lines, providing remarkable detail and naturalistically textured color. Some of the prints are embellished with touches of gold leaf on the feathers of thecheeks and shoulders of the birds, emphasizing the preciousness of the plates and reproducing the iridescence of the birds' feathers. The present selection of images represents an opportunity to acquire spectacular engraving by a foremost 19th-century natural history artist.
Tweet