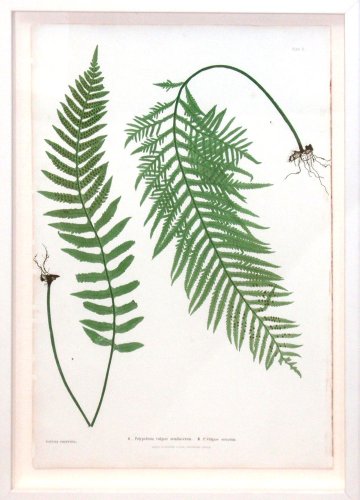 Thomas Moore Pressed nature print from Ferns of Great Britain and Ireland London: 1855 24 1/2" x 17 1/2" framed From the early fifteenth century onwards experiments with making prints from pressed leaves and flowers were conducted. The first ventures into this technique were relatively simple with the specimen inked and paper laid upon it. Pressure was then applied by hand to gain an impression. This rather crude method was advanced and perfected during the nineteenth century by the Imperial Printing Office in Vienna. Plants were now passed under pressure between a lead and a steel plate and an electrotype made, on the lead plate, from the impression. It was this innovative technique that Thomas Moore chose for the creation of the plates in his splendid book, Ferns of Great Britain and Ireland. The plates were produced for Moore by Henry Bradbury and are the finest example of nature-printing available. Indeed, Thomas Moore's book heralded a craze for ferns during the nineteenth century perhaps because of the exquisite delicacy of the images projected.
Tweet