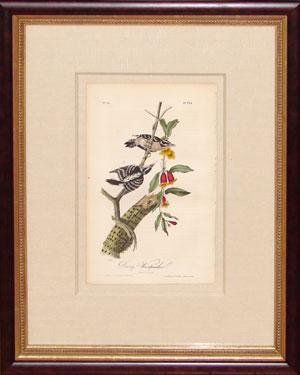 John James Audubon Selection from Birds of America, From Drawings Made in the United States and Their Territories, octavo ed. New York and Philadelphia: J. J. Audubon and J. B. Chevalier, 1839-44. Hand-colored lithographs 10" x 6 1/2"; 15.25" x 18.75" framed A tireless entrepreneur, John James Audubon devoted himself to an unprecedented project, becoming the first to attempt the seemingly insurmountable task of documenting all the bird life of North America. This task grew out of a genuine and passionate interest in his subjects, and Audubon determined not only to complete a project that no one else had undertaken, but to approach it in an entirely innovative manner. His style and his persona were much like the notion of America itself: ambitious, animated, larger than life. The artist's tireless efforts and remarkable talent culminated in the publication in London of his 435-plate Birds of America (1827-1838), undoubtedly the greatest work on birds ever produced. The celebration of this quintessentially American work, and the enterprising, talented artist who created it, has grown steadily since the time of its publication. Even before the double elephant folio edition had been completed, Audubon was planning this, the octavo edition, in order to make his magnificent Birds of America available to a wider spectrum of people. In the introduction to the first part of his reduced format edition, Audubon wrote that he had "been frequently asked, for several years past, by numerous friends of science, both in America and Europe, to present to them and to the public a work on the Ornithology of our country, similar to my large work, but of such dimensions, and at such price, as would enable every student or lover of nature to place it in his Library." All of the birds from Audubon's original folio aquatints were reduced by camera lucida for lithography by the artist's son John Woodhouse, and new species were added. The octavo edition was expanded to 500 plates, and includ
Tweet