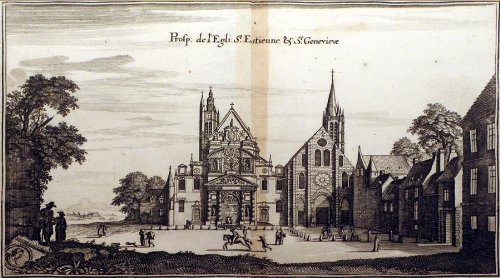 Mathias Merian the Elder (1593-1650) was one of the most prominent members of the leading print publishing family of 17th-century Germany, known throughout Europe for his engravings of cityscapes and landscapes, his scientific books, and his editions of the noted series of travel books, the "Great Voyages". Born and trained in Basel, Switzerland in the early 1600's he began studying drawing, engraving and etching in Zurich with engraver Friedrich Meyer. Merian joined the Frankfurt publishing house of Johann Theodor de Bry in 1616 and, the following year, he married de Bry's daughter Maria Magdalena. Merian gained his greatest acclaim as head of the family publishing house following the death of his father-in-law in 1623. He rapidly and almost single-handedly built up the house to become one of the most important in Europe, etching most of the plates himself until about 1645, when he increasingly relied upon the help of a growing staff of assistants and pupils, among them Wenceslaus Hollar, Rudolf and Conrad Meyer of Zurich, and his sons Matthaus and Casper. "Topographia Galliae" was published from 1655 to 1661 in partnership with Martin Zeiller who wrote the text. "Topographia Galliae" was one of the largest and most comprehensive publishing's of the Gaul region of its time with engravings of major European cities and historically important locations, each expertly engraved by Merian and his sons. In total, "Topographia Galliae" is comprised of 13 parts in four volumes, with nine engraved additional titles and 321 individually detailed engravings with maps and views of cities, towns, castles, fortresses and monasteries. This single page engraving from "Topographia Galliae" titled "Prosp. Del Egli. St. Etienne & St. Genevieve" measures 11.75" x 13" and is in good condition with light foxing throughout and evidence of previous repair to the central crease. This engraving is finely detailed and shows a view of the churches of St. Etienne and St. Genevieve. Now called S
Tweet