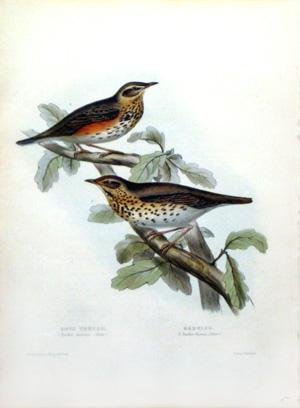 This splendid hand-colored, folio-size lithograph, Song Thrush, turdus musicus (Linn) and Redwing; turdus Iliacus (Linn), from John Gould's (1804-1881) monumental book "Birds Europe" (1832-1837) is in mint condition. Measuring 21.5" x 14.5", this lithograph magnificently displays the author's scientific skill and attention to detail. The two birds illustrated, Song Thrush lower on the branch and Redwing higher, are both members of the Thrush family and are similar looking with white bodies, brown wings and spotted plumage. The Redwing however, derives its name from the red underwing that is shown when in flight. John Gould was an English ornithologist, self-taught artist and naturalist. Gould first worked as a gardener under his father in the Royal Gardens of Windsor from 1818-1824, where he began his illustrations. He became an expert taxidermist, opening his own practice in London in 1824 and in 1827 he became the first Curator and Preserver at the museum of the Zoological Society of London. Through his work he was able to meet with the country's leading naturalists and view new collections of birds given to the Zoological Society. His interest in birds was continually developing and in 1830 he published his first volume on birds, "A Century of Birds From the Himalaya Mountains." For the next fifty years, Gould, his wife and artists working with them traveled around Asia, the East Indies and Australia. His wife Elizabeth and other artists were able to transfer his sketches to stone; hand print and hand-color them. One of the most accomplished and engaging natural history works of the 19th century, "The Birds of Europe" was also the first of Gould's works to feature plates by Edward Lear. A total of sixty-eight images bear Lear's name, and they are among the most remarkable bird drawings ever made. Lear endowed his illustrations with some measure of his own whimsy and intelligence, and his style is at once fluidly spontaneous and realistically precise. In this way,
Tweet