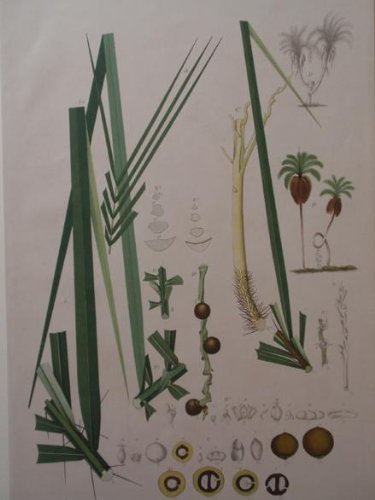 A wonderfully detailed chromolithograph of a tropical palm by João Barbosa Rodrigues (1842-1909) from his breathtaking book "Sertum Palmarum Brasiliensium". This book was published in Brussels in 1903. This print is of superior quality on bright, crisp paper and in good condition overall with some foxing, staining and creasing in margins. Director of the botanical gardens and Professor of Botany at the University of Rio de Janiero, João Barbosa Rodrigues was a highly respected scientist, researcher and illustrator who did much to advance knowledge of Brazilian natural history and habitat. Early nineteenth-century European and American explorers had frequently mentioned the large variety of palms to be found in South America, most noted among them the German naturalist, Alexander von Humboldt. He described the overwhelming impression made by "that vigour and freshness of vegetable life which characterizes the climate of the tropics" and singled out a particular need for "a large number of separate studies of the foliage of trees; of leafy, flowering, or fruitbearing stems; or prostrate trunks." Less that one hundred years later, João Barbosa Rodrigues answered Humboldt's call in this, perhaps one of his finest publications, depicting the palms of Brazil. His illustrations contain both scientific and aesthetic appeal and delineate the various stages of growth of the palm. However, the publication is also significant in that is was completed by a native Brazilian rather than a European or American botanist and thus shows the growing interest and growth in science in both the New World as well as the Old World.
Tweet