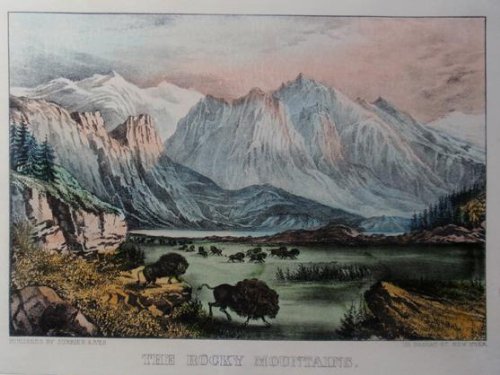 A wonderfully detailed hand colored lithograph from the publishing firm of Currier & Ives. This print measures approximately 11.5"x15". Overall this print is in good condition with some foxing/staining/creasing and a few small tears. A few repairs in margins. Currier and Ives created the most popular and highly regarded lithographs of quintessentially American scenes ever produced. The quality, vast scope and engagingly populist style of their works have made their names synonymous with an idealistic vision of 19th-century American promise and optimism. The Old Grist Mill among their most popular imagery were scenes of winter in the country, which resonated strongly, especially with an urban American public that was highly nostalgic for the simpler rural life. Nathaniel Currier began his lithographic career as an apprentice in 1828. By the mid-1830's he had established his own firm on Spruce Street in New York City. In 1857 James Ives became a partner in the flourishing business, which went on to produce over 7,000 lithographs by 1907. Currier & Ives was undoubtedly the most prolific firm of lithographers in America, its output greater than that of all the other firms combined. The remarkable scope of this production was matched by the company's ability to anticipate popular themes and subject matter. Among their many works are lithographs depicting sporting, railroad and rural scenes, marine, and western views, as well as foreign and domestic city views, historical tableaux, and a wide range of sentimental, morally instructive and advertising images. Currier & Ives' broad productivity was accompanied by consistently high standards of printing and hand-coloring, and their ability to draw on original works by many of the finest American genre painters of the times, including -besides Durrie - Fanny Palmer, Louis Maurer, and Arthur Fitzwilliam Tait. "Arader Galleries intends to have the lowest prices on ABE, Alibris, Biblio, AE, and Artnet while maintaining the highes
Tweet