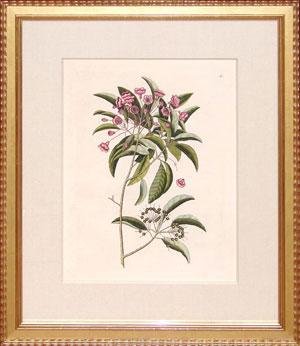 Mark Catesby (1683-1749) Plate from The Natural History of Carolina, Florida, and the Bahama Islands London, 1731-44 (first edition) Hand-colored copperplate engraving Paper size: 20" x 14"; Framed: 24" x 20 1/2" In 1712, the English-born artist and naturalist Mark Catesby embarked on a series of expeditions to the southern colonies of British North America. Enthralled by the wildlife of the New World, he spent years traveling by foot through parts of present-day Virginia, Georgia, the Carolinas and the Bahamas. Over the course of his journeys, he encountered and documented uncountable varieties of animal and plant life that were entirely unknown to Europeans. His drawings and written observations were the raw material for an unprecedented project: a scientific account of previously uninvestigated wildlife, with illustrations taken from life. When Catesby returned to England from his final voyage to America in 1726, he was unable to afford the expense of having his drawings engraved professionally. Undeterred, he taught himself to etch with the assistance of Joseph Goupy, a French artist living in London, and went on to produce all but a few of the plates for his publication. He scrupulously monitored the coloring of the engravings, either painting the impressions himself or closely supervising the work to insure its fidelity to his preparatory studies. The result of Catesby's tenacious effort was the most sweeping, complete and unique natural history study ever done. Widely considered a crowning achievement of 18th-century art and science, Catesby's Natural History of Carolina, Florida and the Bahama Islands has lost none of its power to delight in the 250 years since its publication. This remarkable study of American plants, animals, and marine life provided an important model for later artists, including John James Audubon, who followed in Catesby's footsteps a century later. The works illustrated here are among the masterpieces of Catesby's Natural History. The
Tweet