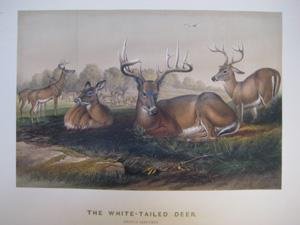 A very detailed hand-colored natural history lithograph by Joseph Wolf (German-English, 1820-1899) from his book "Zoological Sketches", which was compiled for the Zoological Society of London and printed in London: by Henry Graves & Company in 1867. Overall this print measures 13 ½" x 19", the lithograph is tipped into the larger paper which includes a boarder and lettering. Sir Edwin Landseer described Joseph Wolf as ".without exception the best all-round animal painter who ever lived." Born and educated in Prussia, Wolf moved to London in 1848 to pursue a growing number of commissions to illustrate natural history works. He quickly became the foremost animal illustrator in Britain. Among his achievements were the illustrations he produced for Gould's "The Birds of Great Britain"(1862-1873) and the romantic subjects he drew for "The Life and Habits of Wild Animals" (1873). Wolf did not wish to be categorized as a scientific illustrator, preferring to create complete and naturalistic compositions, which conveyed a sense of drama and mystery. Rather than show his subjects isolated from their environment, Wolf integrated them into a natural setting and portrayed them involved in dramatic action. In 1852, the British Zoological Society commissioned Wolf to complete several watercolors for its Zoological Sketches published in parts between 1856 and 1867. P.L. Sclater, the secretary of the society, noted in the publication's preface, "the Council was fortunate enough to secure the services of Mr Joseph Wolf, who may be fairly said to stand alone in intimate knowledge of the habits and forms of Mammals and Birds." By this stage in his career, Wolf's works were in considerable demand both in their own right and as illustrations to books and journals. From 1859 to 1869 Wolf was the regular artist for Ibis, the journal of the Zoological Society, and his work was also reproduced in the Illustrated London News, Once a Week, The Leisure Hour, The Sunday at Home, and The Graphic
Tweet